Good Morning. I have an issue.
my actual setup is :
A master machine ( with pulze render manager) and 2 slave pc ( no pulze) only with VrayDrspawner.
My goal is only to render 2/3 files in the night.
So I put my file sequence on Pulze with “Mode: image”, “Method: Distributed” ( so I can use VrayDrRender), ec… and all is ok.

My problem is when I have “2 frames” to render in sequence. If I choose “Mode: Animation” to see the frames list, the “method Distributed” disappears and the 2 frames will be calculated only with ONE pc without the help of VrayDrRender.
Can You help me?

If you have a licence for Render Manager you got 2 additional licences automatically as a “Starter Pack”. So please be sure that you install and run Render Manager on the slave PCs.
You have to have running RM on each and every PC which you would like to use with RM.
Please be sure that you install it properly, do not forget to set up the inbound/outbound rules on the slaves if you have active Firewall. For more info please visit the documentation and check this tutorial:

If you have any questions, please let me know.
Best regards,
Attila

That is the point. I would like only “one install” in my master that, in the night, run the list of render ( as the old Backburner). It works perfectly but only if I have ONE FRAME.
My question is: Why the option “distributed” works only with “single frames” ( frame zero) and don’t work with a range ( for example frames 0 and 1) ?. 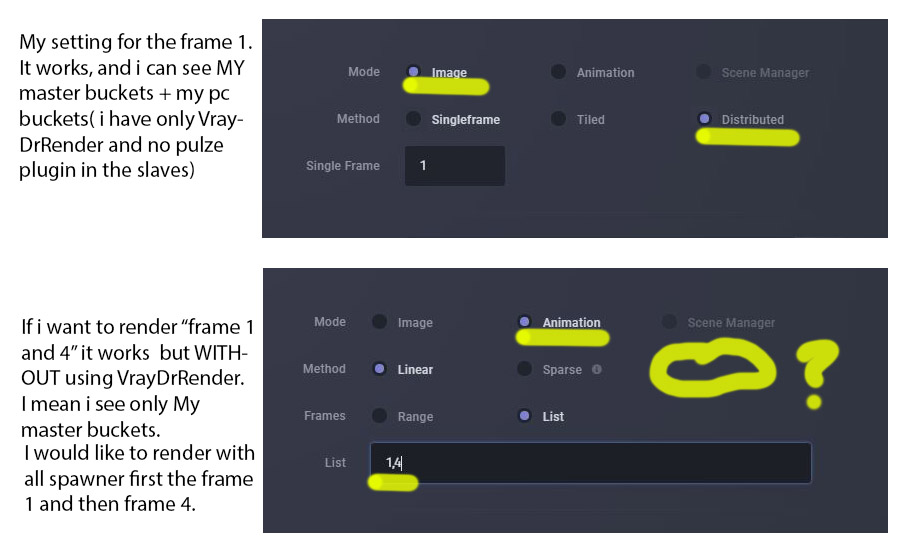 The answer is very simple, we don’t allow it because it is not efficient. Distrbuted rendeing is used for large images and it is not a good idea to mix it with animations. Generally in case of anims you can get the most out of your system if you let each of them render their own frame. If you would like to use dr in the described way you will have to submit 2 jobs (for frame 1 and 4).

You can also check our Scene Manager which will let you control and submit multiple jobs at once.

Anyway you will have to install Pulze on all of your computers if you want to render with them. In case of a Distributed Single Image we take care of cleaning, starting and stoping the spawners.

Is there any reason that you don’t want to install it on the other computers?

Thanks for the answer.
The only reason is that we usually use one pc as a master where I control and put final files in sequence and because we usually launch 2/3 big images in the night and “no animation” ( i mean real animation with hundred frames).
With the backburner sometimes I put a scene with 2/3 frames and same aspect ratio that’s why it could be useful for me to enable distribute render in pulze without split in task. Anyway, as you told me, i will split the frames if there is no other solution.
Maybe in the future, we will use pulze in a better way or we will try the scene manager.
Thanks