I’m having a little issue with the scene manager, I’d like to set different values in Corona Frame buffer (mainly exposure and white balance) for different cameras, I use now the last release of 3ds max 2021 + Corona 6 but this was happening with 5 as well.

3a. (Please refer to the attachment “CFB 1”) I go down to the second, I load a saved .conf file for the 2nd camera into CFB, then I fetch the “Render Settings Overrides”, the overridden values in the scene manager match the ones shown in the CFB even though CFB now shows a white balance of 5750.002 instead of 5750 (not a problem but it’s worth noticing it)

I truly have no clue what could cause this, just wanted to share and see if the answer to this problem lays somewhere.

Thank you in advance! 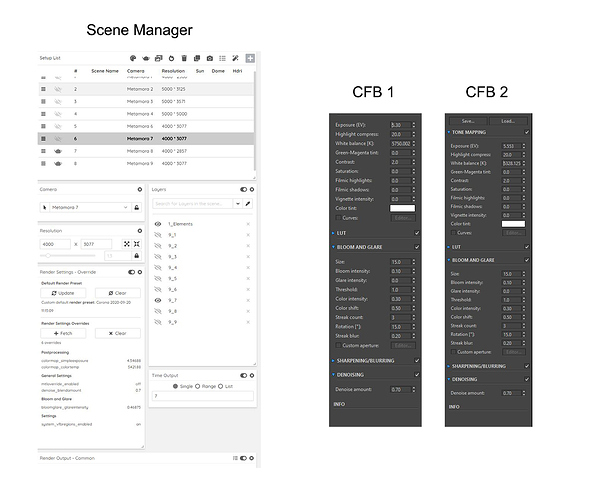 Thanks for the detailed explanation. I’ve tried to reproduce your issue with no luck. Could you send your maxfile and the corona conf files to support@pulze.io so we can take a closer look?