I’ve had an issue were my render job just stops. This is how it looks on my computer:

And this is how the rendernodes look:

And this is how it looks on all of the rendernodes, it has finihed a frame, but it is frosen and wont go further: 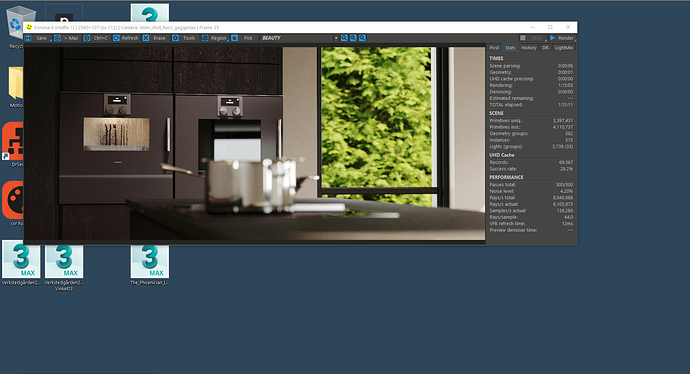 Thanks for reaching out. Could you please collect some logs on 2-3 of the nodes that produced the problem. You can collect the logs in the settings (top roght corner, cogwheel icon) by pressing the Collect log button. Please send them to support@pulze.io and we will have a look asap. Hopefully we can find something valueable and fix your problems.

Thanks for your time.
Peter

Hi all, I am experiencing exactly this problem now. I’ve never really noticed it before because I’ve mainly done stills since adopting Pulze however now that i’m doing an animation its very apparent and does it regularly, obviously when i sleep and cant fix it

Losing many hours render time to this so hopefully there is a fix.

Thought it better to add here than to start a new post for it.

I’ve been monitoring my jobs as they render keeping an eye out for the crash/freeze and I’ve noticed something strange.

If i leave the render manager open on the screen for a small while its gets slower and slower over time. and will eventually freeze as will the 3ds max render behind it. If i minimize the GUI then it will generally chug along quite happily rendering all the frames. However as soon as I bring up the UI again, it will slow down very quickly and freeze. I’ve also noticed that the GPU fan becomes a good bit louder during this and whenever the render manager window is visible. I’ve checked the load on the card in task manager which shows a tiny amount but despite the low load power spikes to very high and eventually the render manager will freeze requiring a force quit. Upon quitting Pulze the GPU power immediately goes down to normal (obviously). This is reproducible every time.

I’m not sure if these are related or separate issues but thought it worthwhile adding to the discussion so that we can find a solution. Its really causing me no end of trouble.

Thank you for reporting the issue with all the details.
We will investigate further what goes on with the GPU usage!
One thing is sure. At the moment Pulze Render Manager’s UI uses resources and we are planning to dramatically reduce it in the upcoming 2.0 version. So this malfunction should not happen with it. We have been testing it inhouse and the official version will be available in Q2.
At the moment as a workaround I kindly suggest to not store finished jobs in the list. As a general rule it can be said that do not have more than 4000 tasks (frames) in the list. So it is recommended to archive/delete old jobs. As you already mentioned, it is also recommended to minimize the UI.
If you have any questions, I’d be happy to answer them.
Best regards,
Attila

Thanks for the response on this. I couldn’t have had more than 500 tasks on the render manager, maybe pushing to 800 if you included completed tasks. This behaviour would happen with just two or three jobs with total 300 tasks. I’m REALLY looking forward to V2.0 as at the moment i feel like I’m playing footsy with the software, only having it up for short periods while I check things, trying not to linger too long

Its no real way to use a render manager.

Is there anywhere we can see what the plans are for v2.0. There’s a few things id love to see implemented and would love to see where you are taking it. I know automation is where you want it to go, to simplify things from the behemoths with all the options. Still, I feel we need a little more control over each jobs actions at present.

Rather than this sound all bad, i really do like the simplicity of it all. Its very streamlined once you leave the (i should be able to do all the things “hat” at the door, and accept the bare necessities). In particular how easy it was to see parity between nodes. Having set up a few small farms, once i understood pulzes quirks it really was pretty straight forward and on the whole I am enjoying using it.

First of all I would like to thank you for your kind words!

We have been working hard to make RM a game changer tool and your feedback helps us a lot!
Please let me reply the different topics:

“Freezed PC”
The most important circumstance over here is that you are using your PC for rendering and for monitoring/controlling all the other PCs and all the running jobs. The rendering eats the most resources. So when you run the CPU on 100% there is no room for Windows and for Render Manager. It is especially true for threadrippers where the GHz per core is relatively lower (2.9GHz vs 3.7GHz old i7). In the upcoming version you will be able to define a “Manager” PC which does the jobmanagment if needed.

In the meantime as a workaround please try the following: When you hit “Activate Night Mode” lower the amount of the threads that you allow to use for rendering. I don’t think that you will run out of 128GB RAM but take it in consideration as well. In this way you reserve some resources for the job management as well. Please let me know if it helps. In general the UI eats some resources but something definitely goes wrong in your case because it should not freeze max.

“Plans for v2.0”
The roadmap will be official very soon over here at the forum. Stay tuned!

“we need a little more control over each job’s actions”
This is a frequent request so we will provide much more control for sure. It is a very exciting development process to keep the simplicity that you also like, and give access to the details. We found a nice balance in case of Scene Manager where by default it is extremely streamlined but if you want you can configure your UI to have a tailor made micro-management tool. We are working on a similar approach in case of RM.

My preferred setup would be to have a management PC, when i’ve run farms in the past that’s the way I would configure it as regardless of the manager it never likes rendering and managing at the same time and causes many issues. However as space is at an absolute premium (working from home at the moment) this isn’t a possibility. Once we are in a studio I will be getting a small dedicated manager PC to take care of this issue, so its great to hear and timely for me that you will be catering for this come V2! The issue with Render Manager though in my case does not seem to be linked to whether the manager PC is rendering or not. It will slow down to the point you are waiting 10 seconds between a click and an action even when its only a node that is still rendering forcing a restart of the manager. Task manager says its using about 4.6% CPU and 2GB Ram, and 0.6% GPU with high power usage. At a guess, and I’m no developer, it looks like over time it saturates a single thread on the manager side. Is the manager single threaded, as that would explain the numbers at least i think? Maybe not why it does this over time though?

Since my last post I have since finished building a second 3990x node and so starting to see how the pooling and management system is supposed to work. I will take heed of your tips for now and lower core count when needed. Out of curiosity how did you code around that priority issue as you don’t seem to have that kind of control through windows as you used to with Intel processors (then again windows isn’t great at handling the obscene amount of cores properly anyway

Great to hear you are providing some options for granular control on the render manager side. I am finding Scene manager game changing and is how RPmanager should have worked but there are still simple things which would vastly improve the pipeline if we had the control to tweak in Render Manager instead of resubmitting a job from scene manager. Changing frame count, resolution and individual task suspensed/enable controls would be at the top of my list.

As always thanks again for all the hard work