we have installed the New Version but V-Ray 6 is not beeing detected!
Nodes Now say there is no supported Version installed

Have you restarted Render Manager since you installed V-Ray?

yes we did already couple of times

Could you please reach out to info@pulze.io with a collected log (Pulze FAQ | How do I collect my Render Manager logs and send them to Pulze support?) from the computer that produces this error and will look into it.

After this update, there is a lot of issues. Camera rendering with target incorrect on all nodes. Now when starting, you need to confirm on each node anima people purchases, this did not happen before, and now because of this it is impossible to run the render remotely. I don’t think it’s necessary to launch a power shell. And there was also no option for the program to start minimized and not a full screen. (pulze 2.1.5 max 2021. corona 8.2. win 11) And because of this it is impossible to switch to max 2023. must use old version of render manager 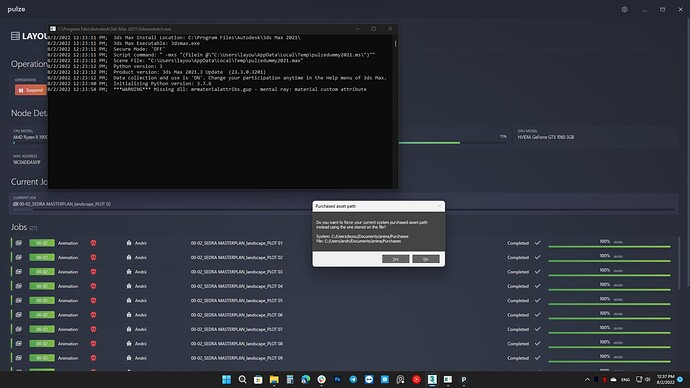 Yes there has been some issues unfortunetly which we managed to address. Please download and reinstall this again and it should be all good: https://public.pulze.io/pulze-downloads/pulze_service/2.1.5/pulze_215_win.zip

For the future, can such fixes be released as a hotfix?
Or perhaps released as another version of Pulze Render Manager, i.e. 2.1.6 / 2.1.5 hotfix 1?

Alternatively, can users be informed via email that reinstallation is required.

If it wasn’t for us checking the forum, we would never know that the fixes have been made and that we need to update manually. Effectively, we would be stuck with non-functional/buggy version of RM 2.1.5. until the next release.
In fact, this has caused multiple jobs to render incorrectly over the weekend, which of course resulted in delays in project delivery. This could have been avoided if we knew the new fixed version of RM already exists.

The possibility to update RM on all machines all at once is great and very convenient, I don’t understand why the fixes to 2.1.5 could not be forced/suggested to users as it is done with every other bigger release.

First of all we are sorry for the inconvenience and for the trouble that the initial update might did. We are planning to have another release during August, but we have to wait a bit until these new issues are cleared and fixed.

Unfortunetly some of these are out of our hands and we had to remove a few fixes and new features in order to keep all the job types and render engines stable.

I agree that this could have been handled better, we definitelly learned from it and will try to avoid these problems in the future.

Once we have a new version we will reach out to every RM user via email and a notification should appear in the software as well.