Hello, I just got the trial for scene manager and I’m seeing a lot of potential so far. We previously had a custom pass manager that was created by someone who no longer works with us, and it was very suited to our needs. But in upgrading our systems, we were no longer able to use it and have been in need of a replacement. Scene manager works well but there are a few additional features that we really need.

One feature would be the ability to apply changes within the scene through selection sets, the same way we would for objects or layers. We often handle scenes with a large amount of cad data that must remain in a large collection of layers. In this case, using either an objects module or a layers module within scene manager is not ideal if we want to apply a change to the collective environment objects or the collective vehicle objects, and a selection set would be more appropriate.

Another feature that is necessary for our workflow is the ability to access the ‘vray object properties’ in order to set up passes with objects that have a negative alpha for compositing in nuke.

The regular object properties accessible through scene manager are useful for the environment pass in image01, seen below. But for image02, the environment objects must have their ‘vray object properties’ changed in order to create the proper alpha, because the front portion of the fence occludes the shapes. Once combined, the end result should be image03. The vray properties that we need to access with scene manager are shown in the two vray dialog boxes below.

Is this a feature that could be implemented in the near future? In addition to control with selection sets?

In addition to these two requests, I’ve seen a few posts for feature requests from other people concerning the following and would be curious as to the status of these:

–a submission tool for deadline - but render manager looks nice, so we might switch in the future

–a hierarchy structure with folders in the setup list or a parent-child structure where child passes inherit properties from parent passes that they are grouped under.

Any feedback would be greatly appreciated!

Sorry for not getting back to you earlier. We already implemented a few of the V-Ray matter properties in the latest beta version: https://pulze.io/download?sku=pulze_scnmgr_max&ver=2.2.3

We created a new properties tab in the object modules for V-Ray: 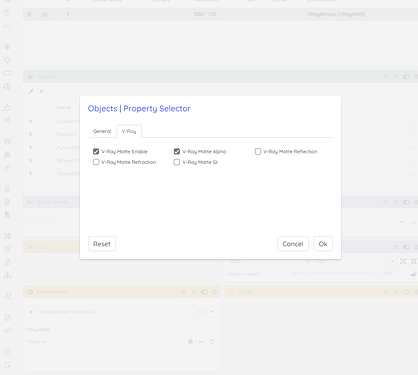 As for the questions/requests:
Submission tool for deadline. Currently we are not planning to implement such feature because of the seamless integration with the Render Manager. If this is a showstopper for you then please contact us at support@pulze.io and we can discuss it further.

Hierarchy structure where properties are inherited is an awesome idea. There has been some internal discussion about grouping the setups, these two things would be very powerful. I’ve added it to our todo list for sure!

Thank you so much for this! Being able to access the vray properties is essential for us. Will this also be accessible from the layers module? we often have very large scenes with lots of objects from converted cad data and using the objects module for this would not be ideal unfortunately.

Hierarchy structure where properties are inherited is an awesome idea. There has been some internal discussion about grouping the setups, these two things would be very powerful. I’ve added it to our todo list for sure!

in regards to the hierarchy structure, I wanted to share our previous pass manager to demonstrate how this may work or if it may apply to any other aspects of scene manager